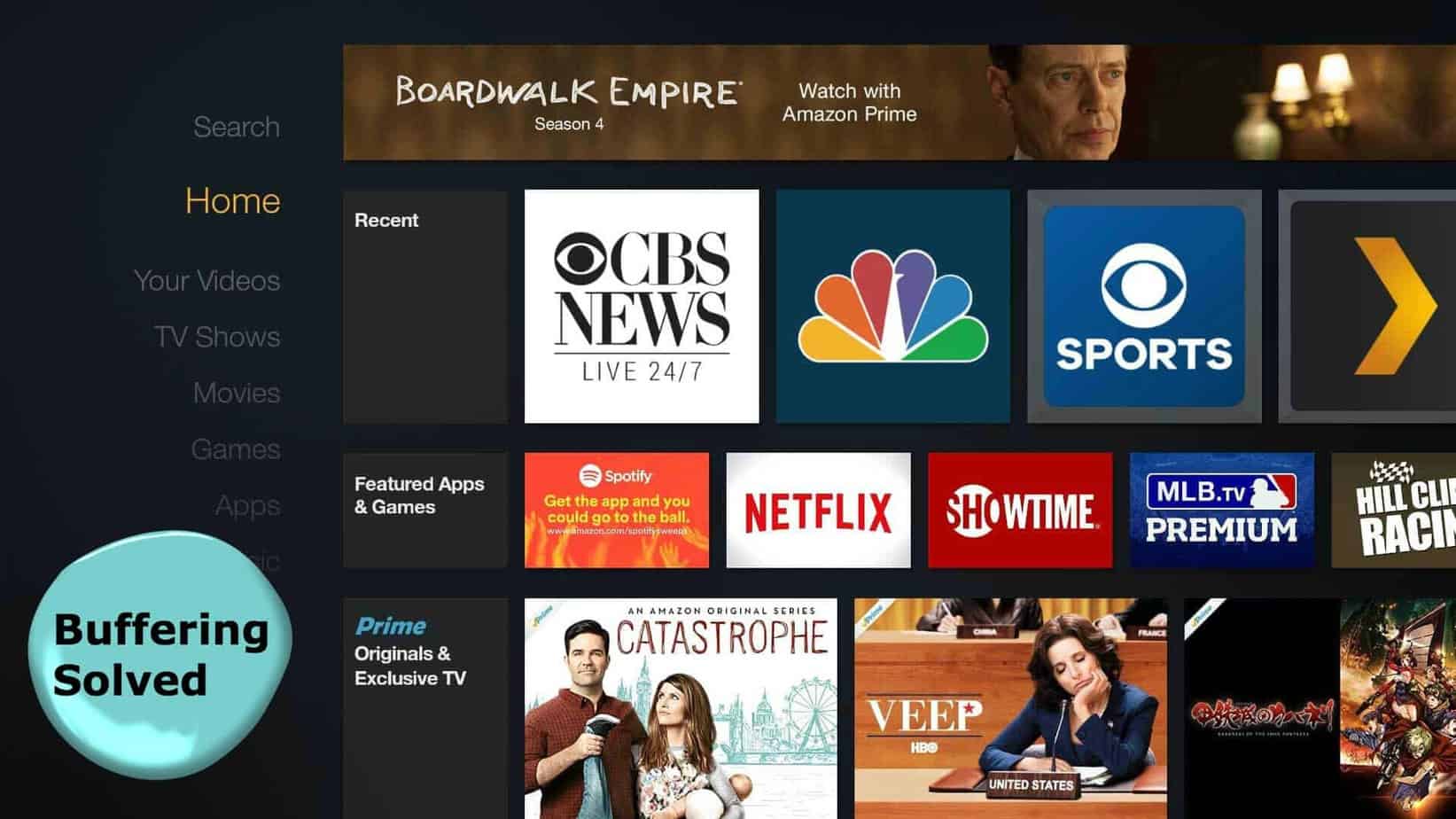 Amazon continues to make waves with its popular Firestick and Fire TV devices. Both open up a world of entertainment for consumers who want to enjoy a combination of online and cable TV programs. The Firestick is definitely a low-cost solution to unlimited content, including live sports events in HD quality, TV series, HD movies and more.

The only downside with using the Firestick device is that it’s vulnerable to occasional Amazon Firestick buffering issues. Although this problem only lasts for a few seconds or minutes at the most, being forced to wait for your show to begin or continue can be quite annoying.

The good news is it’s possible to fix buffering on Firestick. In this article, we’ll share with you all the different techniques that you can use to identify and fix Firestick slow streaming problems.

Why is my Fire Stick buffering you’re asking? You might think that you’re alone in dealing with buffering issues with your Fire TV or Firestick device, but that’s not the case. This is a running problem with these devices and almost every user who owns them complains about the same thing.

The key to Firestick buffer fix is to identify the source of the problem first because it’s not always the same cause.

Why is My Firestick So Slow and Lagging?

The Firestick device automatically downloads the content you stream so that it’s available in a temporary cache. So, when you’re watching a video it’s actually playing from the cache. Meanwhile, the device continues to download the next chunk of content at the same time. This means that it has to juggle two tasks at once, and this is what sometimes causes buffering issues.

If you happen to finish the first part of the movie while the Firestick is still downloading the next chunk of content, it’ll inevitably show you a buffering message. The Firestick will pause the video while it’s downloading the rest of the content in an effort to update the player.

The problem could be worse if you’re using one of those low-powered and smaller Firesick devices. They’re often short on cache storage space and they don’t have the fastest download speeds. That’s what causes the drawn-out buffering interruptions that they’re famous for.

Now that we understand what causes buffering, it’s time to take a look at the reasons behind the lack of synchronization between the downloading of new content and playback of cached videos.

Internet Service Providers (ISP) are known for purposefully slowing down loading speeds and this can negatively affect your Firestick viewing experience. ISPs periodically scan for particular traffic categories that they want to discourage their users from watching, which is what often happens to Firestick users.

Your buffering issues might be coming from the Fire TV hardware itself or it could be a problem with your modem, Ethernet cable or router.

Perhaps your home internet connection is struggling to handle the demands of a particular stream.

How to Stop Buffering on Firestick

Imagine watching a movie or an episode of your favorite TV series only for the TV to start buffering right at the exciting part. There’s nothing more excruciating. Once you’ve identified the issue behind the problem, try one of the following solutions to fix it.

Amazon releases regular updates for the Fire OS software. These updates are designed to improve speed, security, and performance. That’s why it’s important to periodically install Firestick updates to make sure that its operating system is working optimally.

2. Uninstall Apps That You Don’t Use

Does your device have a lot of apps? This can significantly compromise your ability to enjoy content from your Firestick because it adds to the overall demand on the device’s software.

Third-party apps are notorious for slowing down the Firestick because they’re not optimized to perform properly.

Check this guide on how to uninstall unwanted apps on your Firestick.

If your Firestick keeps buffering as a result of ISP throttling, then it might be a good idea to subscribe to a VPN. A Virtual Private Network (VPN) hides your IP address in order to disguise your traffic and browsing history.

VPNs provide you with a fully encrypted connection so that your ISP can’t see your traffic and penalize you for watching content via your Firestick. This means you can enjoy high-speed connections and no more buffering issues.

For the best results, opt for a well-known VPN like IPVanish that offers the fastest loading speeds compared to other providers.

If your problem is a slow server, simply open the app and select a different location to hide your actual location. If possible, choose a location that’s near your actual address. Improve your chances further by opting for a VPN with automated connection and in-built speed test features. Alternatively, give the server a few hours and use it later when there’s less traffic to compete with.

Most people are so obsessed with their Firestick devices that they never switch them off! Unfortunately, keeping your Fire TV Stick on at all times can lead to serious buffering issues. That’s why you need to reboot your device every now and then to clear out its cache and improve performance.

Here’s how you can do this:

1. Launch your Firestick and scroll to the Home menu.

2. Scroll to the topmost part of the screen, move the mouse towards the right and select “Settings.”

3. Scroll to the right and choose “My Fire TV.” 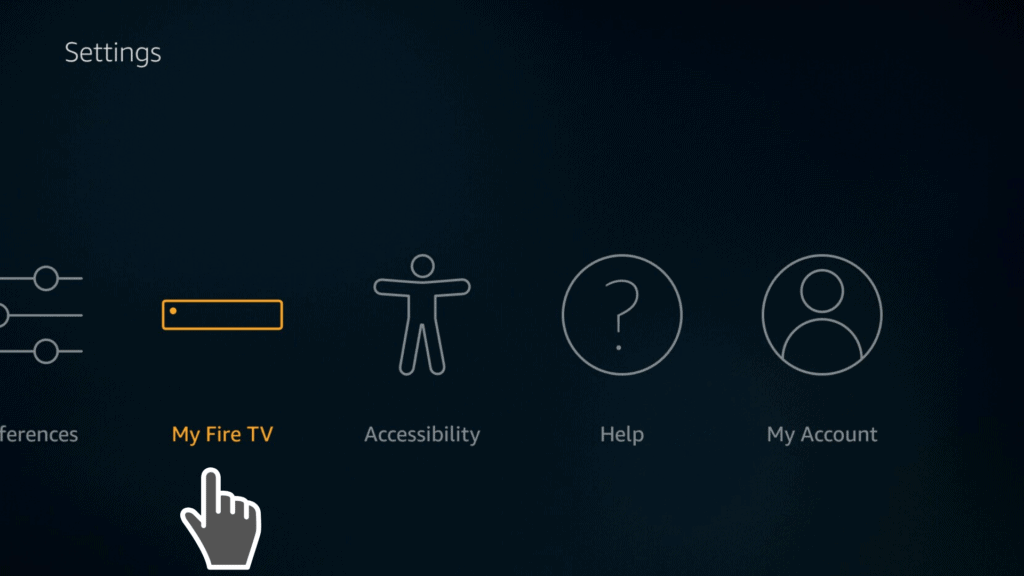 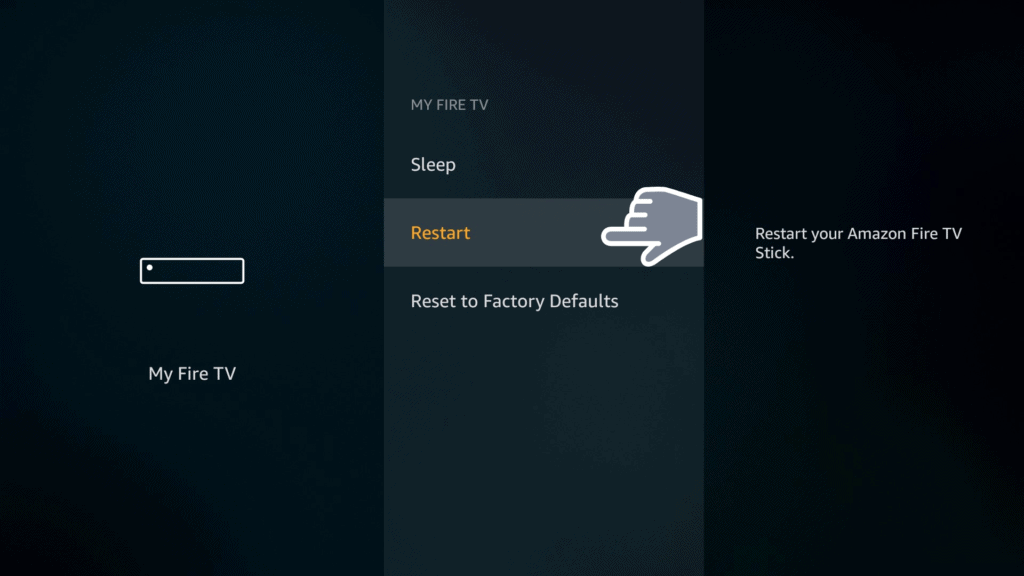 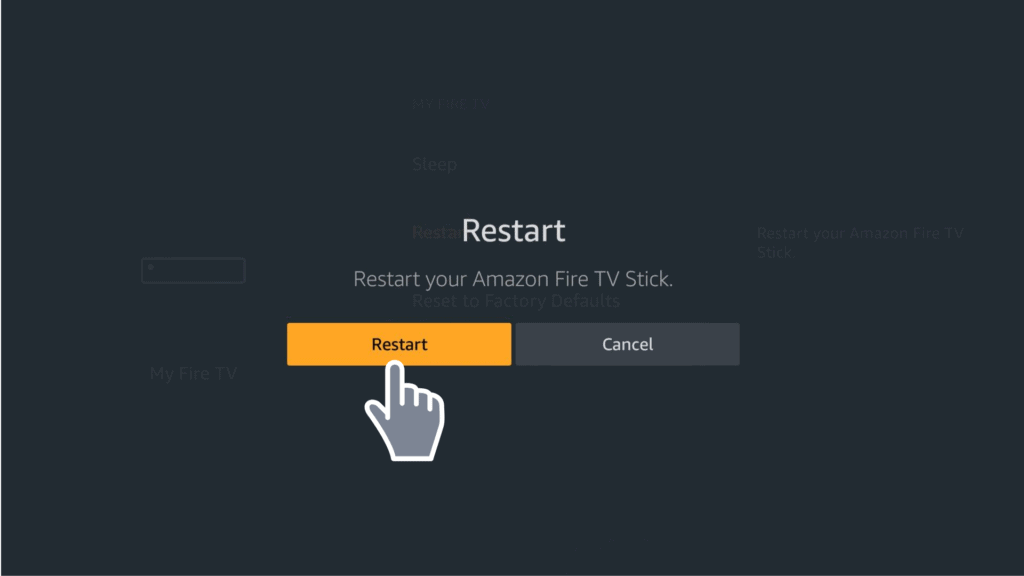 The Firestick will reboot itself automatically, and the process usually takes a few minutes.

It’s quite possible that some of the apps on your device are running background connections at the same time that you’re busy streaming. The more apps you have, Firestick running slow will become become a bigger problem. How to fix buffering on Firestick? Simply turn off some of the apps from the settings page of the device.

The first step is to deactivate all automatic app updates:

1. From the Home screen of your Firestick, scroll to the top right corner and click on “Settings.”
2. Scroll to the right again and choose “Applications.” 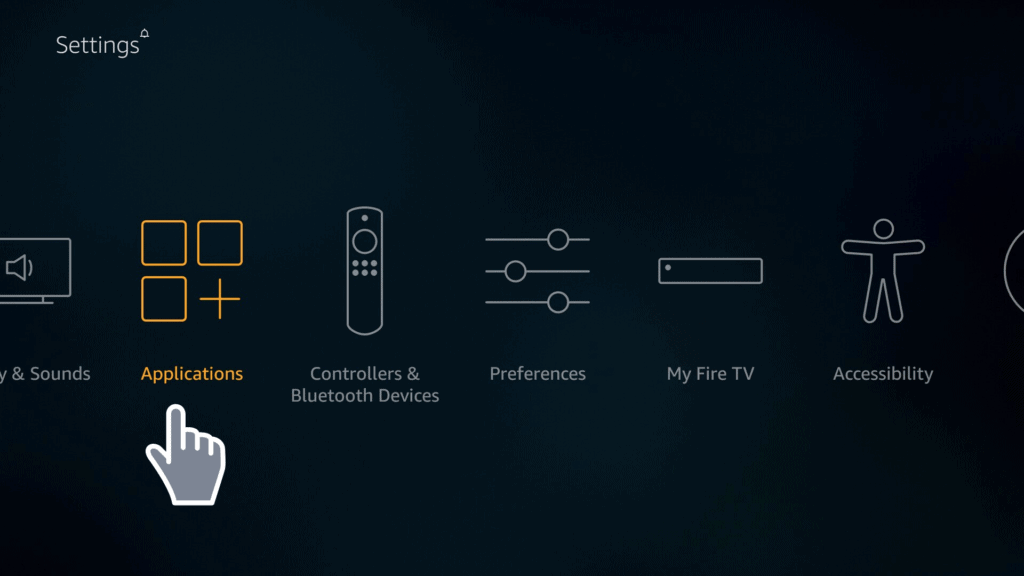 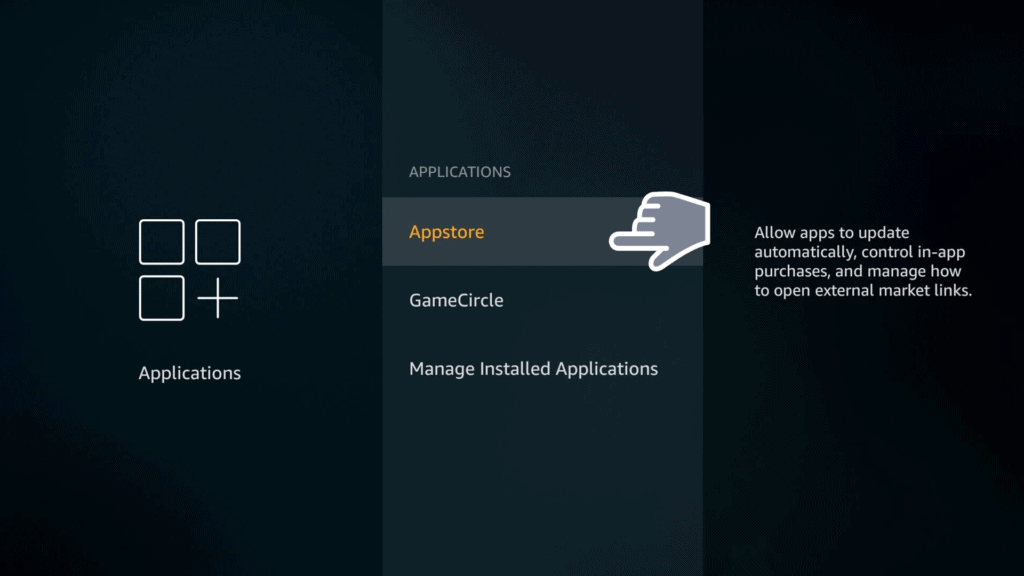 4. Click on “Automatic Updates” and make sure it is on OFF mode. 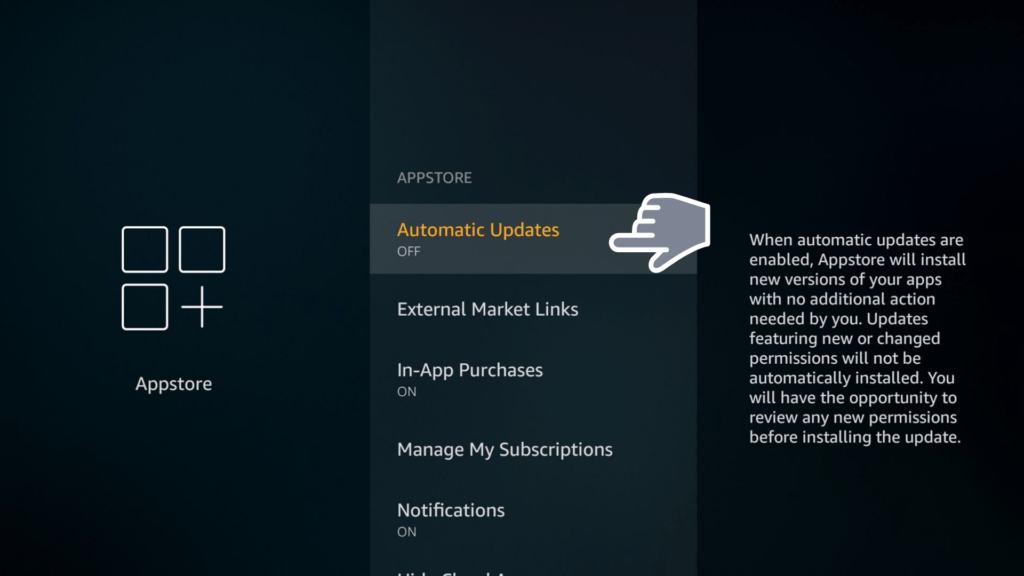 Then, let’s go and deactivate app data usage:
1. Go to “Settings” again and click on “Preferences.” 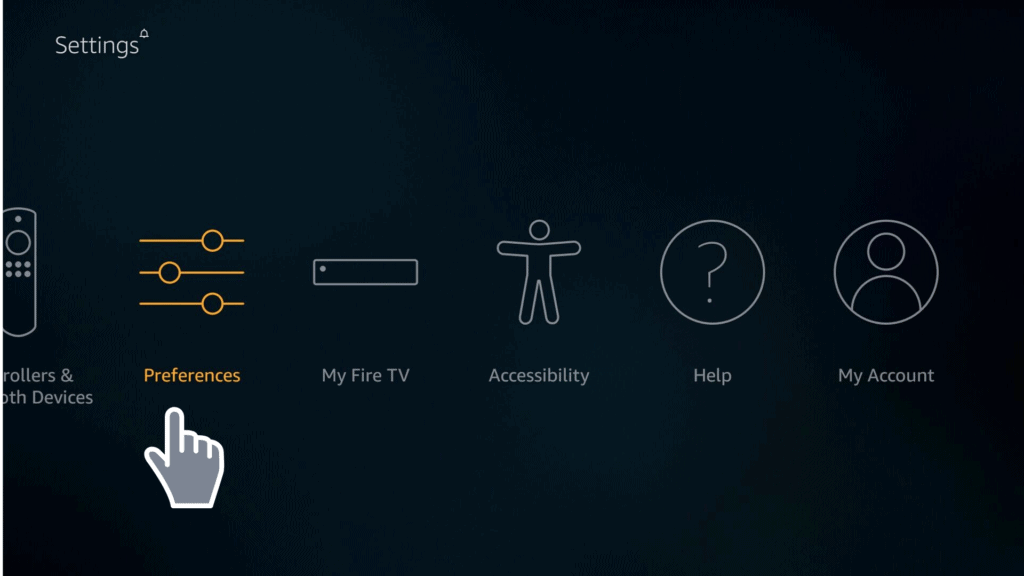 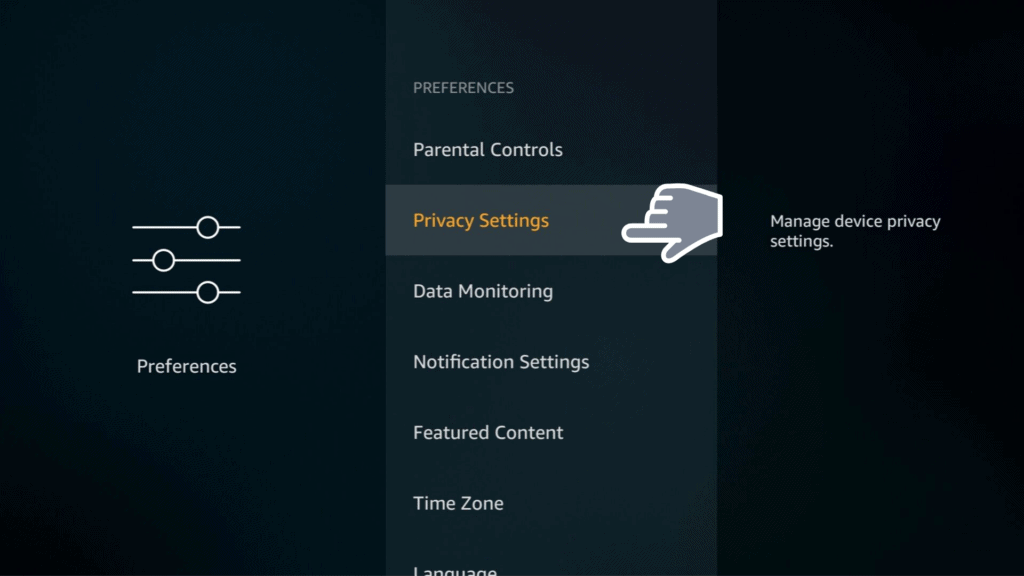 3. Make sure the ” Collect App Usage Data” option is on OFF mode. If not, click on it and change from ON to OFF. 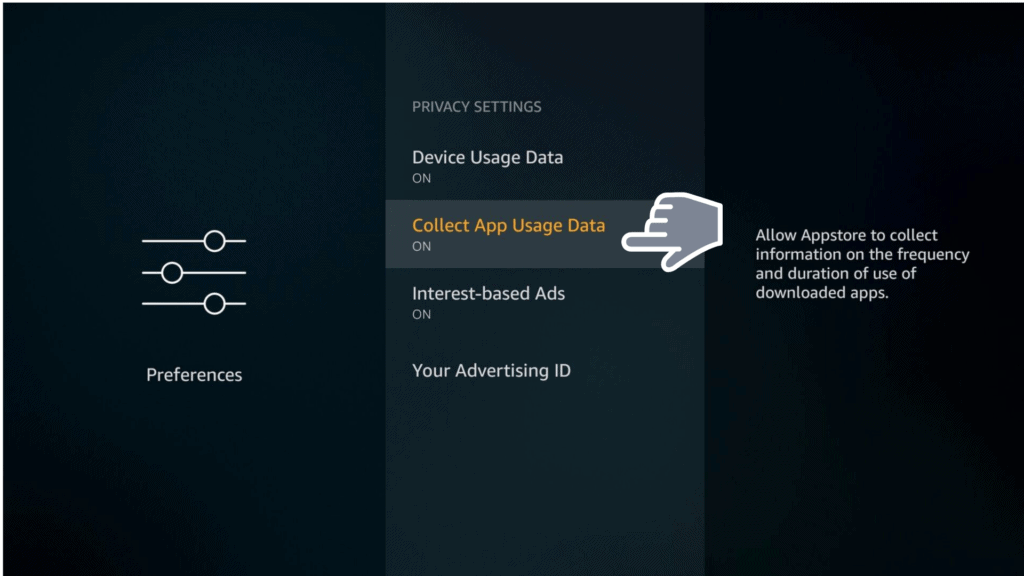 To fix buffering on Firestick that’s caused by a slow local network, simply reset everything. This means you’ll have to switch off your router and your modem completely. Wait for a few seconds before you plug everything back in following the same order through which you turned them off. This is sometimes the best way to fix interference issues with your Firestick and improve your local network’s performance.

7. Do a Factory Reset

If you’ve tried all the solutions mentioned above and your Firestick still has buffering issues, you might have to do something more radical. This could mean doing a complete factory reset, which will remove almost all your Firestick data, including sideloaded software and downloaded apps. However, you’ll still have your important data, purchases, and downloads. But doing this will solve your buffering issues.

Scroll to the bottom of the page and select “Restore to Factory Defaults” and confirm your selection. Your Amazon Firestick  will take care of the rest. 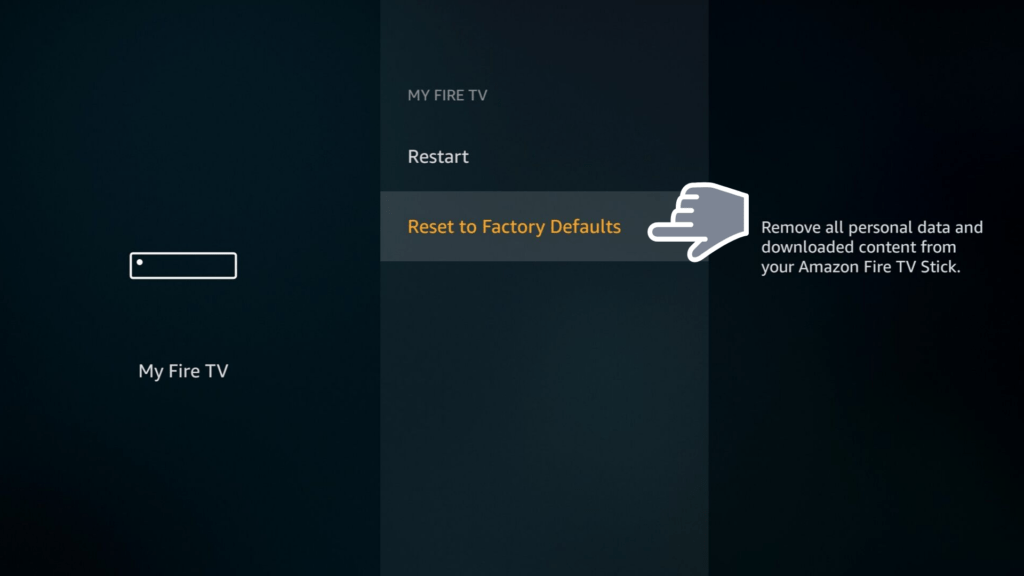 Amazon’s Firestick is a fun and convenient device that gives viewers access to all types of content. But it can be frustrating to deal with Amazon Fire Stick buffering problems, which are common with these devices. Fortunately, if you follow the tips in this article, you can fix buffering on Firestick without even hiring a professional.

However, if you’re looking for a quick and all-encompassing solution, consider using a VPN like IPVanish. This VPN works with all types of devices and has a proven track record with solving buffering issues.

If your Firestick keeps buffering, please let us know in the comments section!