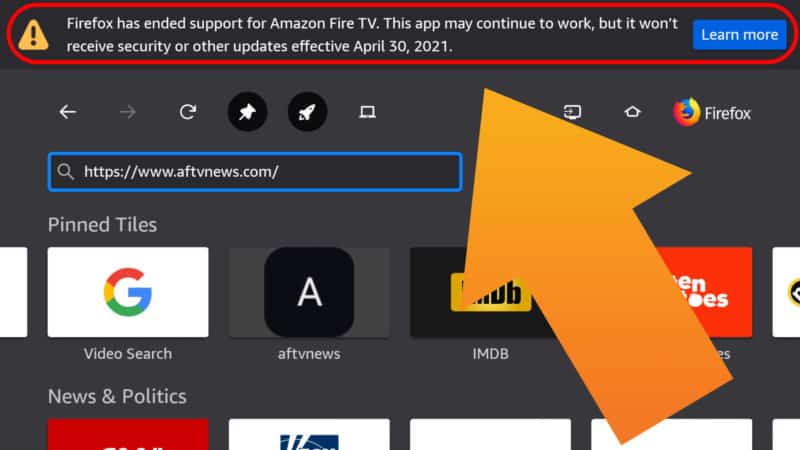 If you’re still using the Firefox browser on your Fire TV Stick, be aware that you only have a few days still left before Firefox ends its support for the browser on both Amazon Fire TV and Echo Show devices. As of April 30th, 2021, the Firefox browser won’t be available on Fire TV and Echo Show devices. As Firefox ends support for Amazon Fire TV, it’s important to stop using the browser as early as possible rather than run the risk of finding yourself suddenly without a browser on your favorite streaming device.

Mozilla, the owners of the popular Firefox browser, recently announced that they would end support of their browser on two Amazon streaming devices, Fire TV and Echo Show, as of April 30th, 2021.

The unexpected announcement now means that as of April 30th you will no longer be able to install Firefox on your Fire TV Stick or Echo Show devices.

It also means that you will not be able to reinstall Firefox once you uninstall it from your Amazon device or after performing a factory reset to the device. Keep in mind that Mozilla will no longer provide security updates or any other form of support for Fire TV Stick and Echo Show.

Mozilla is yet to provide the reason why they took the decision to officially end support for the app on Fire TV and Echo Show. However, it’s rather obvious that the decision was born out of the bad blood between Mozilla and the tech giant Google.

The popularity of Firefox on Amazon streaming devices resulted from a dispute between Google and Amazon.

If you have been using streaming devices for the last few years, you may remember that Amazon gave the users of Fire TV and Echo Show access to the Firefox browser for the first time in 2017 after Google stated that it would be blocking their popular YouTube video app on the Amazon devices.

After Google blocked YouTube on Fire TV and Show, Amazon had to find a way to make YouTube available on their devices since you couldn’t find the popular video platform via Amazon’s own browser, Silk.

This is why Amazon launched Firefox to give its users an option to easily access the web “from the comforts of their couch.” Amazon even later added support for Firefox just before their users had entirely lost access to the YouTube app.

The dispute between Google and Amazon actually left many Fire TV users unable to use the YouTube app for a while. Keep in mind that YouTube was no longer accessible via Amazon’s Silk browser.

The good news for Fire TV Stick users was that with the Firefox browser they could easily access YouTube on their devices. You could even say that access to YouTube is one of the main reasons why Firefox became more popular than Silk, Amazon’s own in-house browser.

Firefox allowed Fire TV Stick users to stream videos hosed on the Google-owned YouTube on their devices despite the fact that the two tech giants weren’t on good terms.

According to Google, the decision to pull out YouTube from Amazon’s devices was due to what they called “lack of reciprocity” in providing access to Google’s products.

Google stated that Amazon didn’t provide access to some of their products such as Google Home and Chromecast and didn’t even provide Amazon Prime Video to Chromecast users. It’s also worth noting that a month prior to the feud, Amazon had stopped selling the latest Nest products on its platform.

The two major tech giants later made up and Amazon brought back support for YouTube on Fire TV. This meant that Fire TV users no longer required a browser to watch YouTube videos.

YouTube was available again for download on Fire TV as an app. Firefox also remained one of the most used browsers on Amazon streaming devices, until the sudden “Firefox ends support for Fire TV and Echo Show” announcement from Mozilla.

As Firefox ends support for Fire TV and Echo Show, without stating the reason why Fire TV users who had already installed Firefox can still use the browser.

However, in a recent email about the issue, Mozilla stated that you will no longer be protected against any newly discovered security gaps and glitches on Firefox if you continue using the browser. Mozilla further advised Fire TV users to switch to Amazon’s Silk browser as from the end of April 2021.

So how much are you going to miss the Firefox browsing experience on your device? Let us know in the comments below.