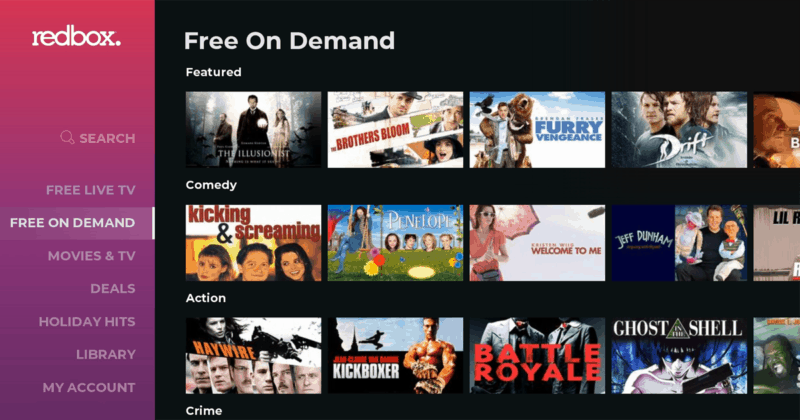 If you’re a big fan of streaming live TV and movies, you’ll be glad to know that Redbox has launched a new service called Redbox Free On Demand.

It’s an ad-supported live TV and movie streaming service that promises thousands of weekly updated titles specifically curated to the taste of the company’s audiences in the USA, Canada, UK, India, and many other countries.

With Redbox Free On Demand, Redbox now joins other free streaming services such as Pluto and Tubi. You just need to download the Redbox app to start enjoying popular titles, cult classics, and fan favorites such as Lord of War, The Illusionist, Trespass, haywire, and many more titles without paying a subscription fee.

While launching the new streaming service, Chris Yates, the general manager of Redbox Free On Demand stated that today’s audiences have created an unprecedented demand for free ad-supported premium on-demand content. This is why the company chose to add free on demand content to their streaming platform.

To most movie fans, Redbox needs no introduction. The Chicago-based company has a good reputation for its 41,000 movie disc dispensing kiosks conveniently located in grocery and convenience stores across the country since 2002.

The company has evolved over time in the entertainment industry. The Apollo Capital hedge fund acquired it in 2016 in a $1.6 billion transaction.

For many years, Redbox focused on video game rentals before moving to movies and TV content. They once offered a service similar to Netflix known as Redbox Instant. It was later canceled because of low subscription numbers. The company later introduced Redbox On Demand in 2017 which gave customers the opportunity to buy or rent movies digitally without necessarily having a subscription.

In 2019, the company launched Redbox Entertainment which acquired rights to more movies and TV series. Early in 2020, Redbox launched Redbox Free Live TV. This is an ad-supported channel-based video-on-demand service similar to Xumo and Pluto. The service featured the company’s channels such as Redbox Rush which features action and adventure content, Redbox Comedy, and Redbox Spotlight.

You can easily access Redbox through its APK which gives you access to thousands of channels in the USA, UK, Canada, India, and many more countries.

The Redbox TV APK is a lightweight application that doesn’t use a lot of your TV device’s resources. It comes in a small size that barely takes any storage space in your streaming device. However, the app is at present not available for Firestick and Fire TV.

You can install Redbox TV APK on the following devices:

What’s There to Watch on Redbox Free On Demand Streaming?

You have a huge selection of entertaining content to watch in the Redbox Free On Demand service. The content streamed through the new Redbox service is carefully curated to match the taste of the app’s users.

At present, you may not get some of the big blockbusters and classics but the service has a good selection of notable cult hits.

Some of the popular titles available throughout December 2020 include notable titles such as:

Redbox is emerging as a serious contender in the already crowded live TV and movie streaming industry dominated by big names such as Pluto and Netflix.

Their new Redbox Free On Demand streaming service promises to deliver hundreds of carefully selected titles every week to meet the demands of the app’s users.

Best of all, as the name says, Redbox Free On Demand is completely free of charge. You don’t need to pay for subscription if you can stand the ads.

Have you tried Redbox Free On Demand lately? Let us know your experience with the new Redbox service in the comments below!