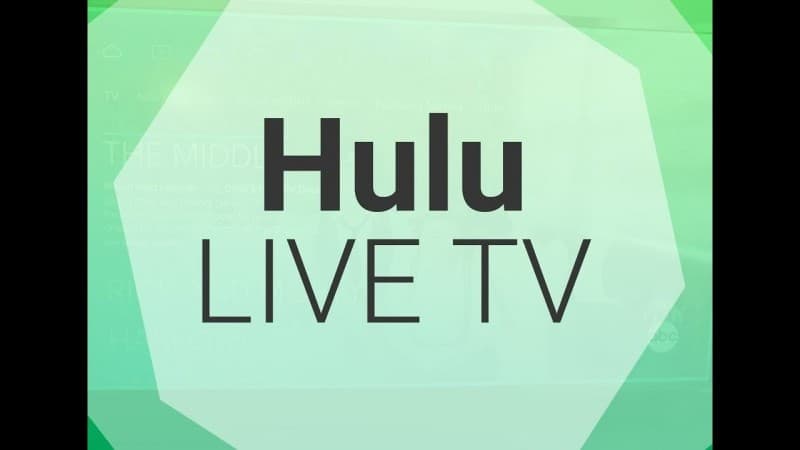 Hulu Live TV is one of the most popular IPTV services today. It is known for providing a host of sports, news, and entertainment channels for kids and adults. It can even be installed on a wide range of devices including iOS and Android devices as well as Amazon Fire TV, Fire Stick, Fire TV Cube, and Roku.

In this detailed Hulu Live TV Review, we look at some of the key features of this streaming service. We will also go through some of the reasons why it has become quite popular among Live TV viewers today.

What Exactly is Hulu? 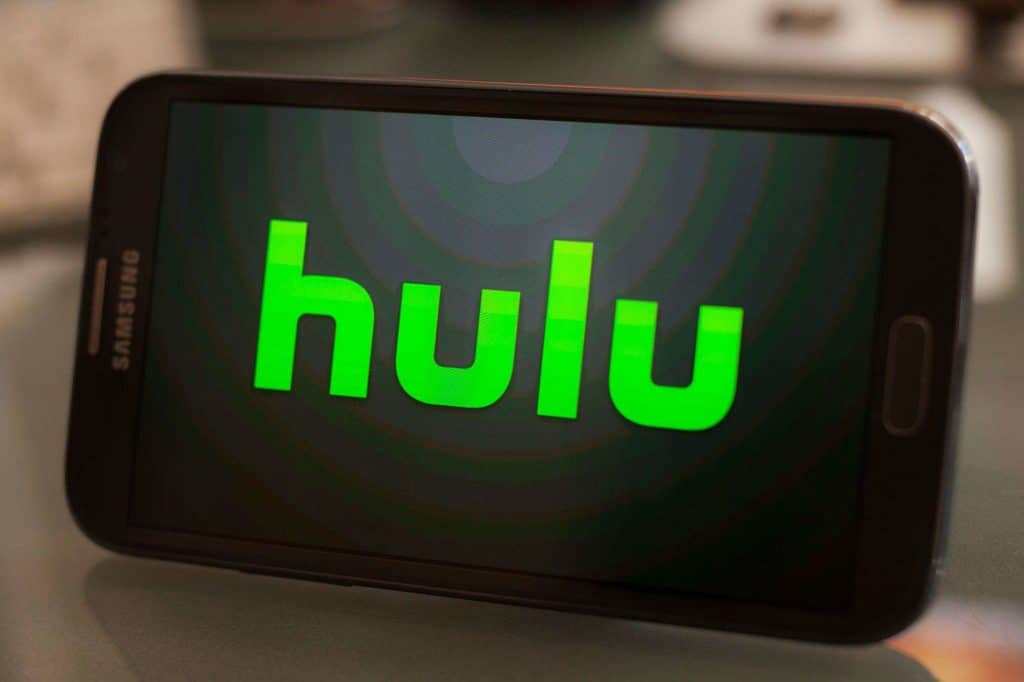 Hulu is also known as one of the most competitively priced services with affordable pricing plans. With a subscription to Hulu + Live TV plan, you get access to over 60 channels. They offer original shows and movies as well as Live TV programs such as the latest sports events, news, and entertainment.

Another great thing about Hulu that deserves a mention in this Hulu Live TV review is the fact that the streaming service is compatible with almost all the popular devices including iOS and Android devices as well as Amazon Firestick, Fire TV, and Roku. It is an ideal choice for cord-cutters and content streamers looking for the best entertainment at an affordable price.

So how popular is Hulu? You cannot deny the fact that Hulu is one of the most popular IPTV services today. In the first quarter of 2019, the company stated that it had over 28 million subscribers in the United States. In the same period, Hulu had added 3.8 million subscribers and surpassed its closest rival, Netflix. Netflix reported a net subscriber addition of 1.74 million.

Judging by the 2019 figures, there’s no denying the fact that Hulu is the most popular Live TV streaming service today.

Hulu is well known for its Hulu Streaming Library. This library boasts of a wide range of TV shows, original programs, movies, premium channels, and kids’ programs. It has exclusive new and past favorite shows only found on Hulu such as Adventure Time, Killing Eve, I am the Night, King of the Hill, ER, Prison Break, Futurama, and many more.

Hulu also provides viewers with a diverse menu of movies, documentaries, and comedy, action, and drama films. Some of their original award-winning shows include The Handmaid’s Tale and other popular drama series, miniseries, animation cartoons, documentary series, book adaptations, and anthologies.

Hulu has also been increasing its offerings of late. Just recently, the company signed a contract with Lionsgate for exclusive rights to stream Lionsgate’s movies in 2020 and 2021. Hulu also acquired exclusive streaming rights to all movies distributed by Bleecker Street.

The Live TV streaming company has a lineup of top news channels including ABC News, CNBC, Fox News, and Bloomberg. As a Hulu subscriber, you can watch all your favorite shows on popular channels including AMC, BBC America, ABC, CBS, Comedy Central, Bravo, HGTV, Food Network, VH1, and Telemundo among others. Your kids will also enjoy all the popular kids’ programs from Nickelodeon, Cartoon Network, Universal Kids, and even Disney Plus depending on the subscription plan you have. 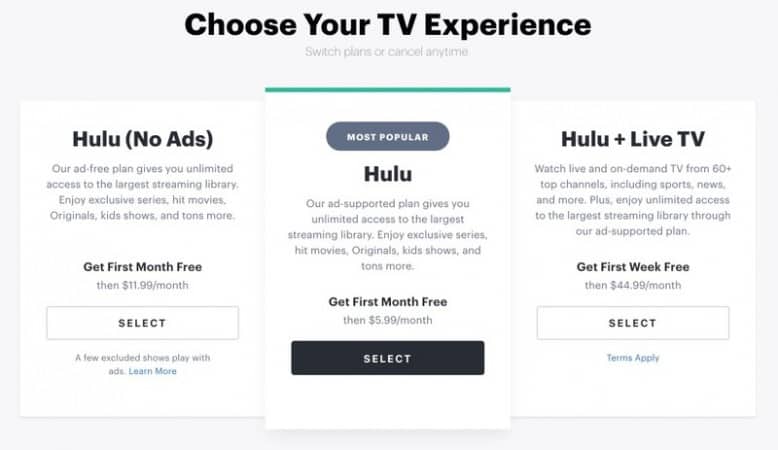 One of the reasons why Hulu saw a huge surge in their subscriber base in the first quarter of 2019 was because they revised their monthly basic plan price downwards from $7.99 to just $5.99 in February of the same year. They also added the popular Disney+ channel to its lineup. Keep in mind that this was the same time Netflix hiked its monthly fees.

Presently, Hulu has an ad-supported plan that comes with its exclusive movies, series, kid shows, Hulu originals, and a host of other entertaining programs. New subscribers get the first month free of charge.

If you want to avoid ads, you can opt for the Hulu No Ads plan available at just $11.99 per month. The first month is free for new subscribers. You can also download your favorite tiles and watch them offline.

The Hulu + Live TV plan is the highest premium plan currently available at $54.99 per month. It used to be $44.99 up to December 2019 when Hulu increased its monthly subscription price. With this plan, you get over 60 channels of both live and on-demand programming. You also get access to Hulu’s streaming library. You can even record Live TV and get 50 hours of Cloud DVR storage. New subscribers get a free trial for this plan too. You can also upgrade to a higher plan or cancel your subscription any time you want to.

Hulu also offers its subscribers more add-ons. But keep in mind that the overall cost can really add up if you get too many add-ons. Some of the most popular add-ons include HBO with a $14.99 per month extra fee, Cinemax at $9.99, and STARZ at $8.99, and SHOWMAX at $10.99 per month. You can also get on-demand and live streaming content from Spanish networks. You can do this with the Espanol add-on which costs $4.99 per month.

Remember, you can always stick to the standard Hulu plan. This one costs under $6 per month and you still get access to a lot of entertaining content for the whole family.

This Hulu Live TV review would not be complete without a quick look at the company’s user interface. Hulu updated their UI in October 2019. It made their menus easier to navigate, improved accessibility to different features, and generally made everything more user-friendly. All the texts, buttons, and images are quite visible now.

One of the best features in the new UI is the Live TV grid guide with different categories including news, movies, sports, kids, and even the most recent shows that you have watched. You can use the guide to plan what you intend to watch for the next 14 days.

The Hulu mobile app is also quite useful and effective. You can easily navigate through different features, browse shows, and even navigate to My Stuff section and organize your DVR storage straight from your mobile device.

Hulu recently began offering viewers with shows in high-quality 4K streaming. However, 4K is only available on selected devices including Firestick, 5th gen or higher Apple TV, and Chromecast Ultra. At the time of writing the shows are limited to just Hulu Originals.

The Cloud DVR recording function is only available to subscribers of the Hulu + Live TV plan. It gives you up to 50 hours of storage with high-quality recording.

However, keep in mind that you’ll need to purchase the Enhanced Cloud DVR add-on. This if you want to fast forward through ads. The best thing about this upgrade is that it gives you up to 200 hours of storage for just $9.99 per month.

To be fair, we have included a few things we didn’t like about Hulu to make this article a complete Hulu Live TV review and analysis.

So, first off is the ad-supported plan. It may be cheaper than most IPTV options out there but the ads can be quite frustrating even for a cord-cutter. In fact, most of us switch to cord-cutting to evade ads in the first place. However, let’s not forget that ads are a major source of income for the company, which keeps between 30 and 50 percent of the revenue from the ads it shows.

Another downside of Hulu is that their No Ads plan is not completely ad-free. They explain this contradiction on their website stating that some shows will occasionally show ads to abide with streaming rights riles. If you watch popular shows such as Marvel’s Agents of S.H.I.E.L.D and Grey’s Anatomy, be prepared to suffer a few short ads before and after each episode. Fortunately, there no ads while the episode is running.

You’ll be glad to know that you can still stream content from Hulu on incompatible devices such as 2nd and 3rd Gen Apple TVs, some LG TVs, Roku models, Sony TVs, TiVO, and Samsung using the classic Hulu app that gives you access. Unfortunately, you’ll not be able to access Live TV and a few add-ons.

As clearly shown in this Hulu Live TV review, this is one of the best live TV streaming services for cord-cutters today. Their Hulu + Live TV plan is not only reasonably priced but offers a wide range of channels and live content for both kids and adults. What we would want to see improved is their 4K content on other types of content besides Hulu originals.

Are you a Hulu subscriber? What is your experience with the company? Let us know in the comments below!