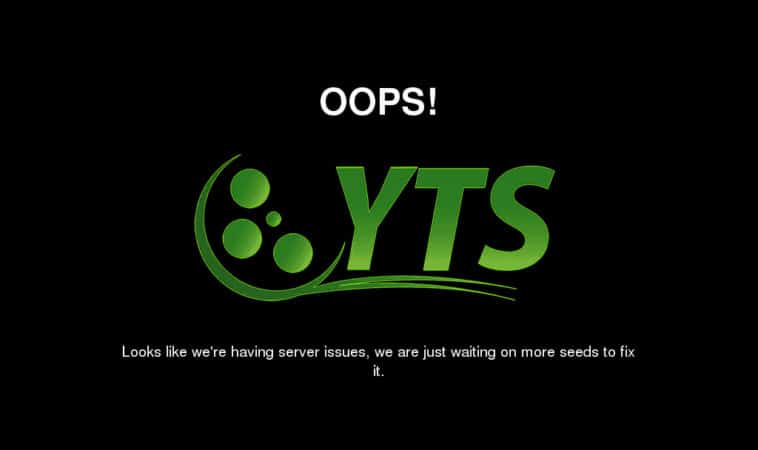 When using websites like The Pirate Bay and YTS torrents, it’s common knowledge that your IP addresses and other types of data is compromised.

Of course, people continue to use these sites. This is because they feel that their information will be safe and that their data won’t be recklessly shared with third-parties. But, since 2013, we’re not quite sure if this is the best course of action.

It’s on this year that The Pirate Bay released user logs as part of the Prenda Law copyright criminal prosecution case. This led to the arrest of two layers who are still doing time to this day.

It’s been some time since then. Now we have YTS torrents as one of the most popular torrent sites in the world. This was a position previously held by The Pirate Bay.

YTS Giving Up on User Data

We have been suspecting what’s happening for a while now. But we can confirm that YTS has unfortunately released the personal information of a user to a Hawaiian law firm.

That’s because the law firm currently represents companies that own the rights to movies like Rambo: Last Blood and Hellboy. Both of which are affected by copyright infringement activities on the site.

Apparently, it all started when an attorney named Kerry Culpepper sued YTS for copyright infringement.

It’s apparent that a chief YTS operator known as Senthil Vijay Segaran has been working with Culpepper. This was done to provide user information such as IP addresses as part of a sweeping anti-piracy lawsuit happening in the US.

The issue we’re seeing is that user data is being compromised and handed over to the authorities. Authorities are in turn using this information to send email threats to said users. These emails include cash settlement demands, which is a pretty scary prospect.

An alleged YTS user recently received an email from Culpepper IP. This email starts with three pieces of important information. It includes the date of the copyright infringement, the user’s IP address, and email.

There’s obviously more information involved in this scenario which we aren’t at liberty to share at this moment because we want to protect our source.

But, the email further states that a lawsuit was filed by a Hawaiian law firm. This was on behalf of the original copyright holders who were affected by the actions of YTS torrents and its users, having identified the details of said users from the YTS website operator.

It’s basically a courtesy email that should serve as a warning before the law firm takes real legal action. This means that this campaign wouldn’t get anywhere without the YTS data that’s being utilized.

The email really goes into detail, talking about how the users logged into the YTS website with their details. Even quoting the IP address that they utilized and what torrent files they illegally downloaded. The problem is that said files are in violation of the law firm’s client’s copyright.

We must say that this is an interesting claim since torrent files don’t usually contain any copyrighted content. Only metadata which is perfectly legal to download. That’s why it’s typically impossible to prosecute anyone for downloading a torrent file. It’s usually difficult to follow the trail of events that lead to the exact user.

It’s worth noting that a user’s IP address can be seen and found if they choose to join a content swarm. But there’s no evidence to show that this is what happened in this scenario.

Again, it’s not illegal to download a torrent file, the problem lies in sharing copyrighted content. The courts recognize that there’s an inherent difference between the two actions.

However, if there’s evidence to suggest that a user downloaded a torrent site on a specific date and their email address is identified then it’s easy to figure out what their IP address is by searching through the swarm. That type of scenario might be able to pass muster in court.

What Options Do Users Have?

Most of the time in settlement cases, a letter of this nature is typically designed to solicit a cash payment from the recipient.

While we’re not going to give you the exact amount we can confirm that it’s in the ballpark of $1,000. Should the user decide to acquiesce and pay the amount in a timely manner, they’ll be released from all legal claims. They will no longer be a part of the case moving forward.

But, additional information is also required as part of the settlement.

This includes submitting a signed indictment showing that the BitTorrent client participated in the infringement, as well as details such as the site promoter and the name of the website itself, and how the recipient received the initial email, which is usually from an ISP.

There’s no telling how the law firm plans to use this information. But it’s worth noting that they might be planning on putting together a stronger case. Keep in mind that Culpepper is in the process of an anti-piracy campaign against Hurricane Electric.

What Do You Need to Know

At face value, we seem to be dealing with an obviously illegal site that’s operated through a legal entity.

Unfortunately, both entities are utilized to collect and process private user data. This data is later handed over to media companies and attorneys. This is done in order to collect payments for alleged copyright infringements committed by said users in cahoots with certain torrent companies and providers.

Obviously, Culpepper know what they’re doing but they do have an unusual approach. After all, we’re not aware of any user data transfer of this nature.

But, what we can say it’s quite curious that a legal entity like Techmodo Limited should be slated as an illegal operator when it’s also shown as the provider of user information for users that were enabled by YTS torrents. It sets an interesting precedent, to say the least, a worrying one at that.

There’s a lot of uproar on this precedent coming from company law lawyers, privacy buffs, and copyright experts alike. They say that this could have far-reaching implications on privacy and copyright law.

That’s why it’s so important to protect yourself with a VPN like IPVanish. This is if you want to avoid being on the receiving end of these infringement suits.

What are your thoughts on the YTS torrents situation? Let us know in the comments below!