However, most IPTV resellers don’t shy away from this reality. They instead embrace it. Whether it’s on social media or YouTube, you will notice that many resellers state clearly in their promotional videos that these packages are illegal. They say you should buy them at your own risk. But it seems even resellers themselves may land in hot soup.

Boom Media IPTV, one of the most successful resellers in the US, is currently facing a lawsuit from IPTV DISH Network and NagraStar. This is for illegally selling their content to the public. The lawsuit was filed in a New York District court. The lawsuit names John Henderson and Debra Henderson as defendants. John is the founder of BoomMedia.org. He has been running the company from home with the help of his mother Debra.

Contents of the Lawsuit 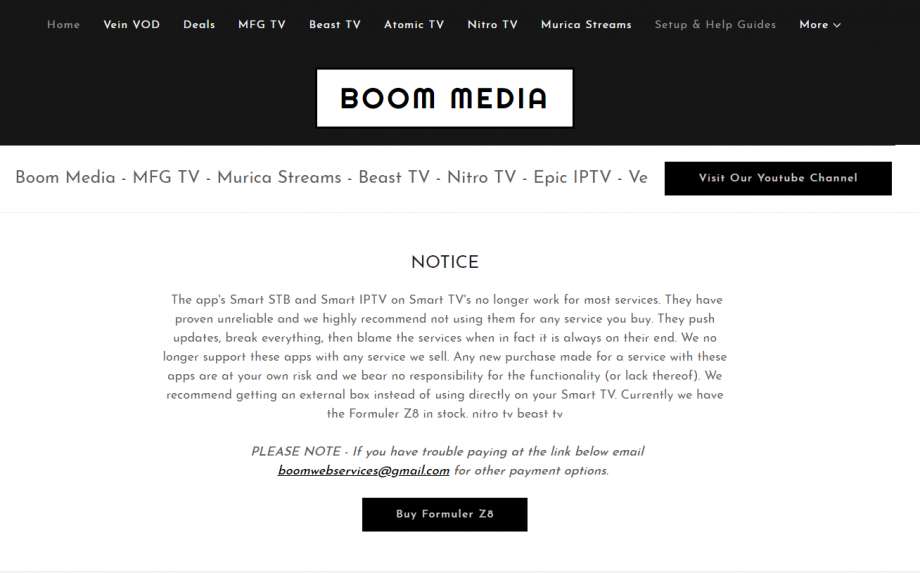 John and Debra have been accused of selling “access codes.” These access codes are used illegally to access DISH programming through the Internet. The lawsuit also adds that these codes have generally been used to allow Internet-enabled devices access to servers used to transmit DISH content to customers. These are customers of Beast TV, MFG TV, Vader Streams, OK2, Epic IPTV, and others. Boom Media has also been accused of promoting access to channels such as HBO and ShowTime. The IPTV reseller is being sued for providing illegal access codes to PPV events associated with WWE and UFC as well.

DISH Network says that these access codes are typically sold for between $10 and $20 a month. Despite this, Boom Media founder John Henderson notes that, even though he is responsible for the day to day running of the business, it is his mother Debra who received payments from Boom’s customers.

But DISH Network claims that it doesn’t matter who gets paid. The fact that Boom is dealing in illegal pirated content makes it liable in the suit. DISH even goes on to point out to one of Boom’s YouTube promotional videos, where John Henderson himself admits that the company is selling illegal and pirated content.

Interestingly enough, DISH is not suing Boom for copyright violation. This would seem like the most logical step. Instead, the network is suing for willful violation of the Federal Communications Act.

DISH is demanding in the suit that Boom Media stops its “ongoing behavior.” The network is also demanding that all devices or equipment sold by the IPTV reseller to facilitate the illegal access of its content be seized. But it doesn’t end there. Dish also wants Boom’s domain name, BoomMedia.org, seized.

The network is pushing to acquire all electronic and hard copy records regarding all the people involved in running Boom Media and its “rebroadcasting scheme.” It’s also very likely that DISH will demand some form of compensation in damages. Right now, we are not sure how much money the network will be seeking. But it will surely be a lot. Some experts are even arguing that hundreds of thousands of dollars in damages would be a very conservative estimate.

This is not the first time that DISH is suing an IPTV reseller. However, other similar lawsuits have dragged on in court and we don’t see any reason why the Boom Media lawsuit will go any faster. The network may, however, decide to settle out of court and negotiate payments for damages directly with Boom Media. There are also reports that Pirate DISH Network may settle for more than money.

According to a video posted by Boom Media founder John Henderson, it seems like the network wants to “shake him down” for more information about other major players involved in distributing pirated IPTV access codes. Henderson says that he is willing to legally fight this lawsuit. But that will require a lot of money. As a result, the Boom founder is calling on fans and customers to donate whatever they can towards his efforts to take on DISH Network.

Well, there’s a showdown in the making here. If you have any comments about the story, feel free to leave them in the comments below!